Crows feasting on my insides - Discussion

Crows feasting on my insides

Crows feasting on my insides

Posts: 57 Join Date: 3/27/19 Recent Posts
Hi friends, I'm writing a few weeks removed from this event. This one took me quite by surprise. It had a little bit of the flavor of a "boss battle," one that I feel like I lost, but barely, and maybe I stole something from the boss along the way. I'll say more about my own interpretation after a few folks have had the chance to chime in. I'm sharing it here welcoming all POVs, and I want to assure people I'm doing well

This happened on the last day of a six day retreat. I'd been practicing with dropping into non-dual awareness. Over the course of the retreat I started dropping in easier and with more clarity. For example, by the last day I was seeing thoughts form visually, in something like a heatmap, and the location of thoughts in the visual field caused me to begin ascribing meaning to the axes (which I could see, and were positioned diagonally as shown in the illustration). 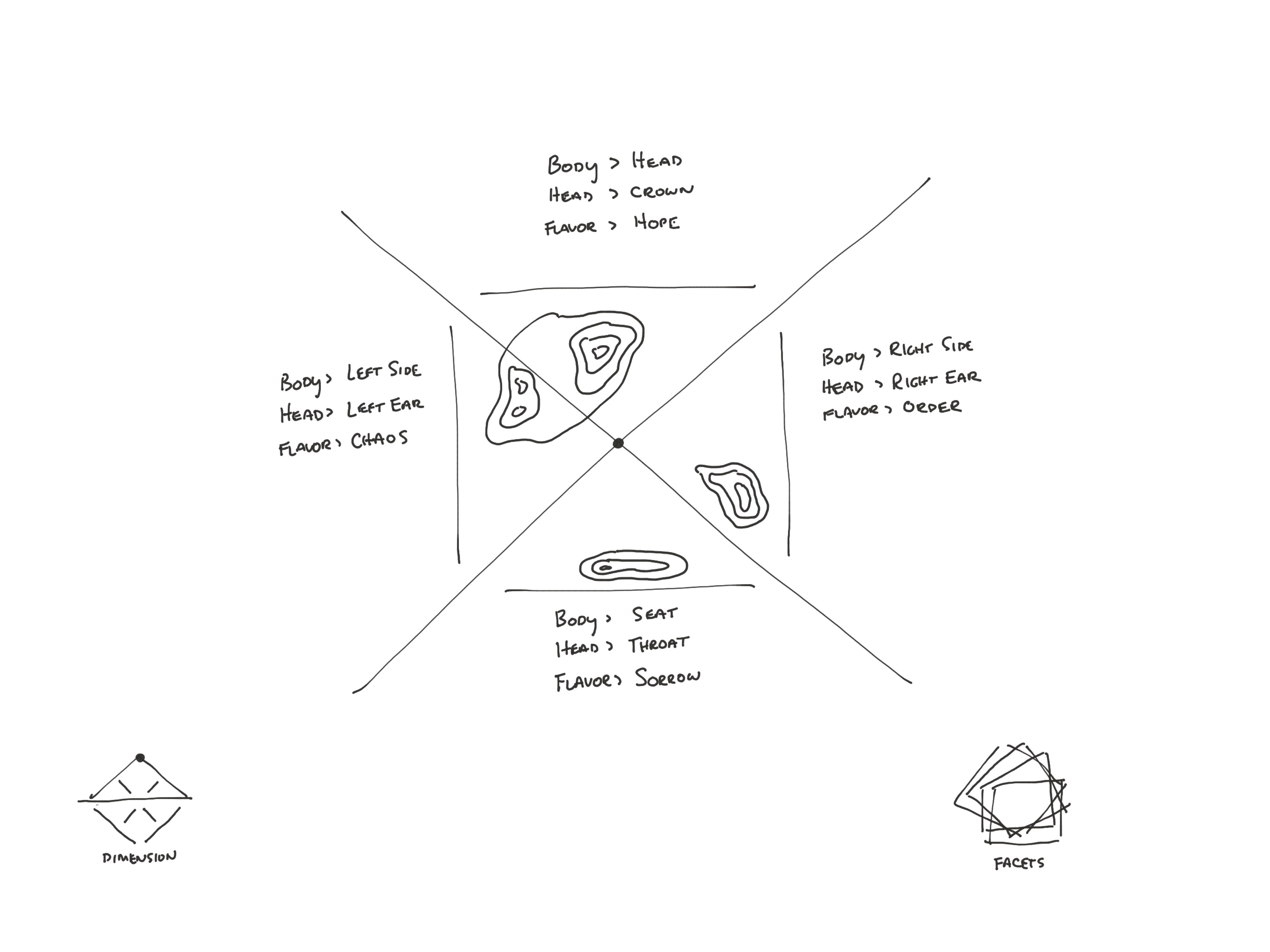 Weeks prior to the retreat I'd had a few intense events that I'd guess were "A&P" based on Daniel's descriptions (I am about 3 years into my practice and am not well-versed in the insight stages). I'm not going to describe those here but I'm happy to if it's helpful.

By the end of the retreat I was really struggling with all the sounds the people around me were making – lots of snuffling, shuffling, coughing. So I went to a yoga room, where the event happened: 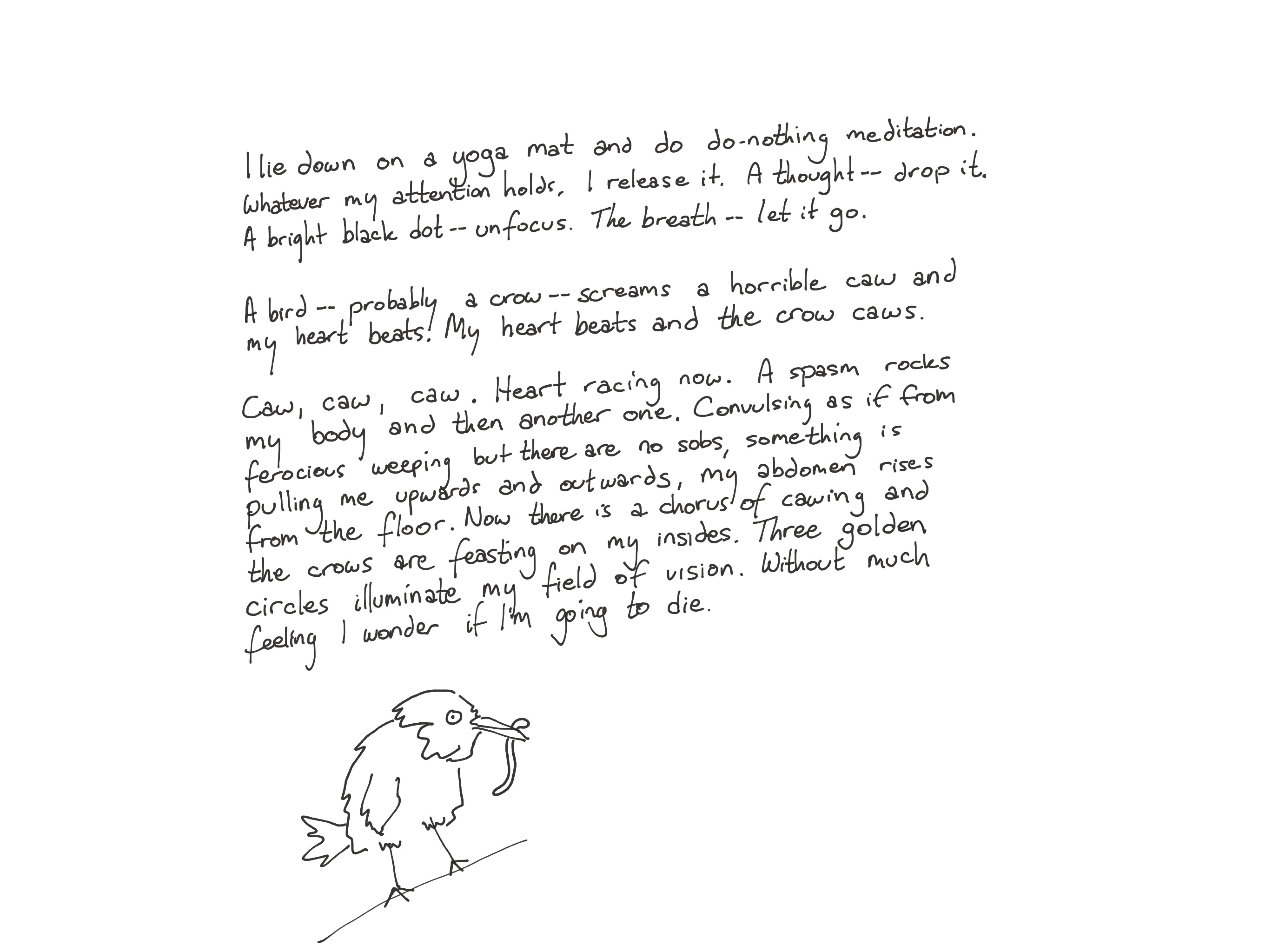 I have no on- or off-the-cushion experience to compare this to. The physical state was very intense. Think: possession, epilepsy, extreme weeping. I could feel the crows tugging at my intestines. These are not metaphors. The mental state was very cool.

Eventually I sat up and stared out the window a while. I saw a woman and suddenly felt aroused, not just for her but for everything, I studied these pink flowers on a large poster on the wall and felt arousal for them too. I went to my room and uh, relieved my arousal. Then feeling very hungry I devoured a huge dinner. All that seemed to slow me down somewhat and "bring me back to normal."

In the week or two following the retreat I felt emptied. Another word I used to describe it was hollow. I felt completely unmotivated toward projects that previously had been very exciting to me. I wasn't totally sure whether I was depressed or seeing things more clearly; I had a hunch it was a bit of both.

Following retreat, meditating itself became a source of strong anxiety, and I felt my heart racing as it had in the yoga room. Again, uncertainty: was my heart really racing or was I somehow more "located" in the heart and feeling it stronger?

This anxiety has subsided over time. Motivation is not exactly back, but my spirits are higher. My practice, never particularly disciplined, has lulled a bit and when I do sit I've been doing concentration practice along with some meditations on the reaction chains of the five elements.

So, what was that?

As for arching the back while lying down, that happens to me too. I have come to observe that it is my own muscles that are lifting me up.

I usually get very hungry after intense meditative experiences too. I have heard that meditating much will make you need less food, but that doesn’t always seem to be the case. Some experiences take a lot of energy, and eating a heavy meal also probably helps getting grounded.

It may have been fear, followed by misery (the hollowness). Remember that it is temporary and empty.

Posts: 260 Join Date: 9/14/19 Recent Posts
There's some nice depth here. You're begining to see your thoughts as objects, or in Buddhist terms a kind of rupa. Thoughts forms are identical to other forms that we perceive through our other senses but thought forms are a very fine kind of rupa, whereas, forms we perceive through our other senses are much more dense. This is a sign that you are disidentifying from your thoughts and when this happens sensual desires become amplified and so mind tries to pull you back into the world of forms again usually through what it sees as the path of least resistance.

I notice what appears to be a spontaneous event of satipatthana practice, namely, the 9 charnal ground contemplations in which you describe crows pecking away at your body. This is most excellent and worthy of further evaluation. It is the recognition that even the body will perish (anicca - impermanence) and that further clinging to the ideas of your body will incur more suffering (dukkha). It is showing you on some peripheral level that you are, in fact, not the body, the ideas about the body nor the one observing the body (anatta - not-self).

Posts: 6439 Join Date: 12/8/18 Recent Posts
Three golden spheres appear in a prayer at the end of this talk. https://youtu.be/RS3qhga0JsQ It made me think of this post.

Posts: 420 Join Date: 7/20/17 Recent Posts
Bardo Cruiser:
This is a sign that you are disidentifying from your thoughts and when this happens sensual desires become amplified and so mind tries to pull you back into the world of forms again usually through what it sees as the path of least resistance.
Interesting, I was wondering why sensuality seems to wax and wane depending on what nana is presenting (and in particular how it can get more intense paradoxically when i'm actually seeing things more clearly). The selfing process trying to distract with shiny sensual toys doesn't seem unrealistic.

I do think the three circles in some way represented the three characteristics, or my incomplete understanding of them, and one area of investigation for me has been to pursue some of the threes in the dharma and make better sense of them. That's led to some fruitful insights.

As is mentioned in the prayer Polly E shared, I also felt compassion to be important here somehow. My heart felt so small, fragile, exposed. I wished for it to be bigger, and I wished to take care of it and protect it, and I think more compassion practice will help me with both.

Posts: 6439 Join Date: 12/8/18 Recent Posts
Regardless of what it was, you can never go wrong with further investigation of the three characteristics. Or cultivating compassion, for that matter.

May you attain the union of wisdom and compassion.