RE: Pragmatic takes on true self - Discussion

Pragmatic takes on true self

Does anyone know any rescources one may read or listen to, that deals with a true-self view on meditation practice.
Check this out and see if it explains a framewrk that makes the point kinda moot
https://www.dharmaoverground.org/discussion/-/message_boards/message/5800908

I don't have any strong metaphysical views on the subject but I feel like, experientially, the true-self view is much more attractive to me right now. However, most teachers I know are of the no-self variety.
The true self is hidden behind obscurating processes. At the same time you could say that at the very end of selfing processes deletion there is very little to self other than what just happens. Then you have to get Metaphysical at that phase, I doubt you are in danger of having to make that choice yet.


While I sometimes like diving into classics I prefer teachers who are more or less contemporary and pragmatic.
Shrug?
Suggestions?
Good luck,
~D

Posts: 2204 Join Date: 2/26/19 Recent Posts
The problem with true-self is that people tend to reify it (conceive of it as some kind of object or thing, like consciousness or a divine essence etc.) Actually people can also reify not-self, becoming attached to emptiness or non-existence (I don't exist at all, or nothing exists). Maybe more people are coming from a background where they conceive of objects (including themselves) as having a solid persistent existence, so true-self reification is more of a risk than not-self, but you need to steer a course between both extremes. Whether you are coming from a true-self perspective or not-self, you tend to end up eventually with just process - just what is (or appears to be) happening (as Dream Walker alludes to). The Buddha understood this dyanmic well, e.g. Kaccayanagotta Sutta:

​​​​​​​Dwelling at Savatthi... Then Ven. Kaccayana Gotta approached the Blessed One and, on arrival, having bowed down, sat to one side. As he was sitting there he said to the Blessed One: "Lord, 'Right view, right view,' it is said. To what extent is there right view?"

"By & large, Kaccayana, this world is in bondage to attachments, clingings (sustenances), & biases. But one such as this does not get involved with or cling to these attachments, clingings, fixations of awareness, biases, or obsessions; nor is he resolved on 'my self.' He has no uncertainty or doubt that just stress, when arising, is arising; stress, when passing away, is passing away. In this, his knowledge is independent of others. It's to this extent, Kaccayana, that there is right view.

If you want to explore “enlightened true-self” perspectives, here are a few ideas. Nisgardatta I am That is good, though with a slight tendency to reify awareness (I don’t think that’s really what he’s doing, but due to the tradition/language it can come across that way in places). David Carse Perfect Brilliant Stillness is also good, though with a tendency to reify luminosity etc. Bernadette Roberts’ The Experience of No-Self is an interesting account of what happens when a Christian goes beyond the concept of an existent divinity, ending up with pure process, though slightly nihilistic/depressing (possibly due to psychological factors, similar to U. G. Krishnamurti The Mystique of Enlightenment). The Chan (Zen) masters are great, true-self is called Buddha Nature in that tradition. They are very clear that it’s not a thing, but they don’t talk much about process. It’s a sudden vs gradual awakening tradition, which is hard to work with (that’s kind of the point – frustrate yourself into enlightenment!) Foyan Instant Zen is a good place to start, here’s a taster:

Whatever you are doing, twenty-four hours a day, in all your various activities, there is something that transcends the Buddhas and Zen Masters; but as soon as you want to understand it, it’s not there. It’s not really there; as soon as you try to gather your attention on it, you have already turned away from it. That is why I say you see but cannot do anything about it.

Does this mean that you will realize it if you do not aim the mind and do not develop intellectual understanding? Far from it— you will fail even more seriously to realize it. Even understanding does not get it, much less not understanding!

If you are spiritually sharp, you can open your eyes and see as soon as you hear me tell you about this. Have not people of immeasurable greatness said this truth is not comprehensible by thought, and that it is where knowledge does not reach? Were it not like this, how could it be called an enlightened truth? Nowadays, however, people just present interpretations and views, making up rationalizations; they have never learned to be thus, and have never reached this state.

If people with potential for enlightenment are willing to see in this way, they must investigate most deeply and examine most closely; all of a sudden they will gain mastery of it and have no further doubt. 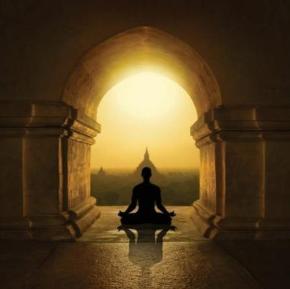 Posts: 238 Join Date: 3/28/21 Recent Posts
It really depends on your goals, what appeals about true self teachings to you?
Are you trying to find your "authentic self" underneath the mess of thoughts, emotions, and behaviours you're observing?
Or are you after some sort of "ultimate truth" of it all?
Let me know

Just a protip, abandon all metaphysical thinking at the door. Meditation is a metaphysics-free zone. We're dealing with our phenomena as they appear, raw, straight up, and no mixer or chaser. This means conjecture about how the world "really is" is truly meaningless and will only lead you into an endless philosophical loop. All that's relevant is the phenomena.

People sometimes use different words when talking about the same thing.

https://www.lionsroar.com/on-enlightenment-an-interview-with-shinzen-young/
On Enlightenment – An Interview with Shinzen Young
...

The salient feature that is characteristic of enlightenment that’s independent of the tradition—whether it’s Christian, Buddhist, Moslem, Hindu, Sikh, Native, Atheist, etc.—the common denominator is that “shift in perception of I-am-ness.” However, depending on a person’s background, and also how a person interprets the experience, the language that’s used to describe what is realized may be very different.

Buddhists formulate the “shift in perception of I-am-ness” as “there truly is no self.” The Buddhists say enlightenment is to realize there is no Atma, which is interpreted as self-as-thing. Within a lot of Hinduism the very same experience is described as discovering the True Self in a way that implies it’s a thing—the Witness, the True Observer, Pure Consciousness, etc. Most Hindu teachers say enlightenment is to find the Atma, which is interpreted as the True Perceiver, or the Nature of consciousness that’s in some way behind all the appearances. You might think they’re talking about completely different experiences but as far as I can see they’re using different descriptions in talking about the same thing.

When you interact and talk with the Hindu babas and the Buddhist masters you get the same body language and vibe. It seems the same re-engineering of the human has taken place in both cases, but the language they use to describe this sounds antithetical.

The Christian mystics will often talk about the soul merging with God. For example when St. Theresa of Avila talks about merging with God she says “it’s like water and water.” But then she also says “the self-forgetting is so profound it seems as though the soul no longer exists.” When a Roman Catholic in the sixteenth century says, “when you merge with God it seems like your soul doesn’t exist anymore,” is an extraordinary statement. St. Theresa’s description of the contemplative path not only passed the test of orthodoxy, it has become orthodoxy! It is the standard map in the Roman Catholic tradition of the Christian meditative and contemplative path. So we can see that the Buddhist no-self model can be interpreted as akin to some of the things that St. Theresa says.

The Jewish formulation of enlightenment involves both the notion of merging with the Source (d’vekut) and the notion of annihilating the somethingness of self (bitul hayesh). It is said that a person who has seen beyond the somethingness of self experiences how moment by moment God continuously creates the self and it’s surrounding scene from nothing (bri’a yesh me-ayn).

Of course there are other things that can affect identity but they do so in a way very different from enlightenment. For one thing there’s insanity, where you think you’re Napoleon or Jesus etc. Then there’s mediumship. You’re dissociated, and for a period of time a god speaks through you, like in Caribbean voodoo. Enlightenment has a functional and liberating impact on identity that’s quite different and in a sense diametrically opposed to things like insanity or mediumship.

The multi-faceted nature of enlightenment is important to emphasize because that’s the basis for a lot of misunderstanding. Teachers will emphasize different facets because that’s been their experience or because they’re reacting to what others have or have not said, and that can be confusing. When a teacher talks about one or even several of the facets but leaves other facets out—implied but not overtly mentioned—that can be very misleading. It’s very difficult for one teacher to cover all of those facets and typically they don’t.

A person who experiences enlightenment will usually evolve over time. One of my favorite quotes is from Zheng Wuguang, a teacher whom I lived with in Taiwan. “Today’s enlightenment is tomorrow’s mistake.” So don’t fixate on how you look at enlightenment because there are other things that can unfold.

Posts: 1692 Join Date: 2/8/16 Recent Posts
In their own way, Dzogchen and Mahamudra has a flavor of true self. I really found those teachings very helpful when I started... and then I came back to them later on. Focusing on the "true self" side of things tends to support developing better self esteem, more functional ego strength, and a willingness/ability to simply do a sitting practice.

​​​​​​​It's a good friendly introduction to the vastness of mind and how many of our problems are really just like temporary clouds floating in a vast sky.