Lessons at the point of a noose: Black Jack Ketchum (badass cowboy!) - Discussion

Lessons at the point of a noose: Black Jack Ketchum (badass cowboy!)

Lessons at the point of a noose: Black Jack Ketchum (badass cowboy!) 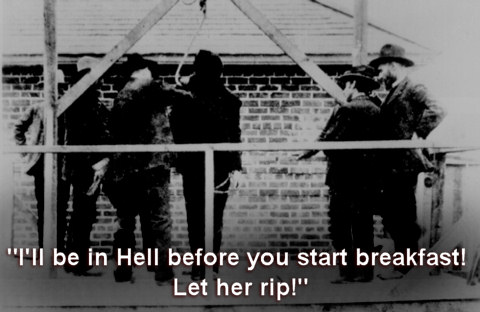 In case you can’t read that image quote, it says “I’ll be in hell before you start breakfast, let her rip” Said (several versions) Black Jack Ketchum (minor train robber cowboy) on the point of being hanged.

Bravado for sure, but, humorous actions in the face of extremely fearful and painful events have always suggested to me that we can (sometimes) intuit the true nature, untouched, unthreatened  and without fear under seemingly horrific or extremely difficult circumstances.

Another story I always found moving for similar reasons was that of an elderly man crushed and dying in a terrible train accident. There was a young girl above him in the wreckage. He helped her get out pushing her above him and said something like “I’m done for, no hope for me, let’s get you out of here” The elderly man died shortly after.

So there is the knowledge of the certainty of death yet, despair is not indicated. There is a mostly hidden knowledge of native transcendence, which may at times come to the front.