Posts: 91 Join Date: 3/24/17 Recent Posts
This is a 2d photograph (nothing special, just a plain photograph), would it then be meaningful to say that the pixels of the red dot "observe" the pixels of the blue dot? I suppose you agree that it wouldn't. Pixels are pixels, and pixels don't observe anything. They are just there painted. 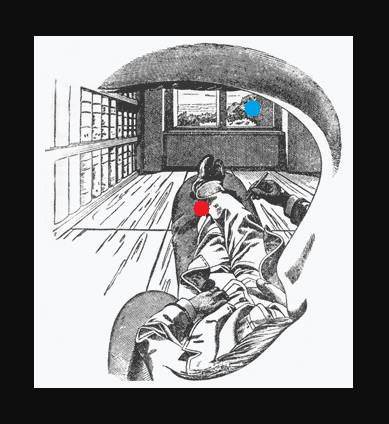 Posts: 91 Join Date: 3/24/17 Recent Posts
Let's say now that instead of a 2d photo we have this 3d hologram (nothing special, just a plain 3d hologram), would it then be meaningful to say that the pixels of the red dot (front plane) "observe" the pixels of the blue dot (deeper plane)? I suppose you agree that it wouldn't. Pixels are pixels, and pixels don't observe anything. They are just there painted-projected.

But this second image is like the space of conscious experience, and when we say that an observer "here" (red dot position) observes a window "there" (blue dot position) is like saying that pixels observe other pixels, and this doesn't make sense (does it?). 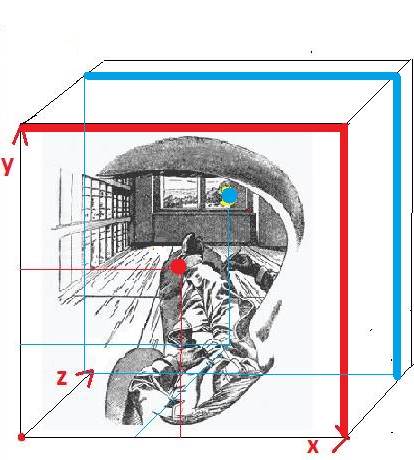 Posts: 91 Join Date: 3/24/17 Recent Posts
Now let's see an other image that it will help us see more clearly that this is indeed the case.

We perceive the experience, of seeing for example, under the impression that there is an observer in the region behind our eyes (red dot), and we perceive it reasonably we would think, considering that the eyes do the seeing. But in reality the eyes DO NOT do the seeing, the eyes just receive light. It is the BRAIN that does the seeing. So even if we only grasp it intellectualy, we agree that the placement of the camera in the hologram of our experience (the observer at the red dot) is influenced by the false conception about the seeing and therefore it is arbitary. So where is the observer if not  behind the eyes? 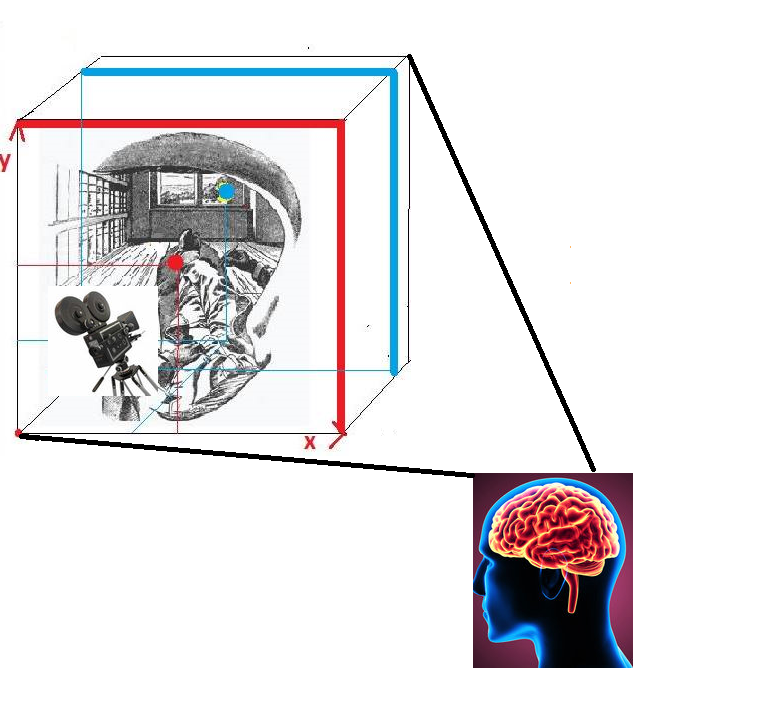 Posts: 91 Join Date: 3/24/17 Recent Posts
The same goes for thinking. Our experience of thinking (1st image) is influenced by our physiological conception that thinking is happening in the brain (image 2), but in reality these two ARE NOT related and so again our perception of placement is arbitary. The brain could be very well transplanted to another region of our body, let's say to our torso, and (if we didn't know about the trasplant) this wouldn't affect our perception of where the thinking takes place at all. The arrising of mental images in the supposed cranial space, as the first image depicts, is obviously an illusion.
So again, even if we only grasp it intellectualy, we agree that the placement of the mental images in the hologram of our experience is influenced by the false conception of thinking and therefore it is arbitary. So where does the thinking take place if not in the imagined empty cranial space? Posts: 4533 Join Date: 1/26/13 Recent Posts
So where does the thinking take place if not in the imagined empty cranial space?

There's a nice podcast by Ken McLeod in which he poses this same conundrum by holding up a cell phone and asking. "Where is this phone? Is it here in my hand? Is it there in your mind?" He then proceeds to spell out a similar assertion that concludes with the idea that the phone's actual "location" in indeterminate.

The thing with the thoughts is that we are inclined to imagine them as though they are arising in the cranial space which in turn reinforces the artificial boundaries and distinction between <my body> and <not my body>, between <inside> and <outside>. Actually one simple experiment we can do is to imagine an object lying on the ground some meters away from us and thus to REALIZE that a thought need not be arising in our head but it can very well arise at the "outside" world. A thought can be seen to arise anywhere actually.. inside the head, above, on the right,on the left, in front...there is no reason to tense and automatically throw our conceptual lasso to put the thought inside our head. We can let it naturally arise where it wants.

Similar tension accompanies the seeing process. We tend to perceive seeing as an action that begins at the observer behind our eyes and is directed to the object, like throwing something to the object, like emitting light to the object with a flashlight. But the object is over there, you don't have to do something to be seen, you don't have to act. Even in physical terms, the photons COME to the eye, they don't LEAVE the eye, to illuminate the object. So we can relax and try if we can perceive seeing objects simply as self-illumminating. We don't have to throw anything to them or trying to capture them (as we saw in the previous posts the pixels are already painted ;-) )

May someone find these hinds helpful for their meditation