Posts: 9 Join Date: 7/20/20 Recent Posts
Some preliminaries. I am not a strong jhana practitioner. While I have a two hour daily meditation routine I have never visited a retreat and I guess this style of practice is not conducive to getting these kinds of states stable and reliable. That said, I had some experiences I would  classify as first and second jhana when doing fire kasina and sometimes with Vajrayana shine practice. So I think I know what these states are like, although I do not have great experience with them.

Now, recently I got into doing discursive meditation as described by Bishop Joseph Hall in "The Art of Divine Meditation". The book is not exactly straight forward instructions from a modern pragmatic dharma perspective, of course (the instructions are from the 17th century), but some general principles are quite clear.

Step 1: Choose some topic for meditation. Hall recommends christian symbolism like the life of the saints. Now, thats not my cup of tea, so I chose something that would work as a functional equivalent, i.e. something uplifting and spiritual. I chose the human potential for good as my topic. Now, let your thoughts wander around the issue and, like in ordinary concentration meditation, whenever you get lost, move your thoughts back to the topic. After a few sessions you may realize that this kind of contemplation of an issue can have a very uplifting effect on the mood.

Step 2: Now here Hall's description is less straightforward, but he does say that this is the most important step of meditation. He says you should use the affection produced by Step 1 to get into a state of bliss. At first I was unsure what to make of this, then I thought, maybe this is about something like jhanas. So I tried standard jhana instructions and focused on the positive sensations the discursive meditation produces...

...and this worked out perfectly. Everytime I tried I entered 1st jhana, i.e. there was a very strong "glowing" bodily sensation of joy. Every time I felt a bit like my body image was kind of distorted, which I gather is standard 1st jhana stuff. So far I could not get to 2nd jhana but I am also only doing this for two days now. I mosty dropped out of the state after a few minutes, but given what I know about these things I expect that I eventually make the transition to higher jhanas.

Now, I don't know what to make of this. If these states are what I believe them to be, then this is the easiest route to jhana I ever discovered, including fire kasina. Does anyone know a similar approach? If not, does anyone want to try this and validate that it is not some individual twerk of mine... Would love to know your opinions. 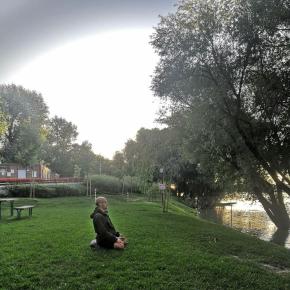 There is a copy of the text you can read online, along with a historical study, in

Bishop Joseph Hall and Protestant meditation in seventeenth-century England : a study with texts of The art of divine meditation (1606) and Occasional meditations (1633), by F. L. Huntley.

(Internet Archive requires you to create a free account and then you may borrow the book for either one hour or for two weeks.)

My guess is that a lot of the stuff we call jhanas happens in a lot of other spiritual traditions, with different explanations, such as being filled with God's love. The mind and body are set up to sometimes function in this way.

Posts: 203 Join Date: 9/21/16 Recent Posts
Which passage are you thinking suggests that he went as far as jhana? This is the closest I could find:

“Seeing therefore, that all our former labour of the braine, is only to affect the heart; after that the minde hath thus trauersed the point proposed throgh all the heads of reason, it shall indeuour to find in the first place some feeling touch, & sweete rellish in that which it hath thus chewed; which fruit, through the blessing of God will voluntarily follow upon a serious Meditation.”

BTW there are other suggestions of jhana-like pleasure in Christian meditation. This is from De Incendio Amoris by the 14th century English writer Richard Rolle:

"I was sitting in a certain chapel, and being much delighted with the sweetness of prayer or meditation, suddenly I felt in me a strange and pleasant heat."

Posts: 9 Join Date: 7/20/20 Recent Posts
I should have mentioned this. The section is entitled: "The second part of meditation: In our affections". The passage you quote is from that section, although I now realitze that my text is a modernized English.

The point I wanted to make was not primarily that this is how the text has to be interpreted. My main goal was to get the word out that this technique is freakishly effective

Posts: 1197 Join Date: 1/17/15 Recent Posts
ultrahumanist:
use the affection produced by Step 1 to get into a state of bliss.

From what you wrote it's not clear to me what you are doing, however this bit (above) from the source you quote makes perfect sense.

A very easy way to enter jhanas is to start with metta and then switch over to jhanas.

Posts: 116 Join Date: 12/1/20 Recent Posts
Just throwing this out there in case it's useful to this discussion, but jhanas aren't unique to Buddhadharma and even the formless realms were practiced (and subsequently abandoned as the Path) by Gotama before he attained Buddhahood. Regardless, they're an important part of practice and provide the mental stability that facilitates insight via vipassana into the nature of the thing.

A more practical way to think about jhanas is as strata-of-mind, accessible to anyone with the determination and willingness to engage in samatha. Daniel has done some really interesting work on this stuff, and has worked with identifying their electronic signatures via EEG machines. His mastery of, and reflexive access to all eight (and even nine, i.e. Nirodha Samapatti) jhana, as well as his breakdowns into the fractal aspects of each provides a lot of detail that you don't find discussed so openly and which you might find helpful.

Posts: 9 Join Date: 7/20/20 Recent Posts
Think of someone you love, notice how thinking of them makes you feel love, focus on the feeling of love and then notice how pleasurable it is to feel love, then focus on the pleasure aspect of that and it produces bliss.
Nice! I tiried this and it worked out similalrly to the discursive technique, just that the jhanic qualities are quite different. The state is more expansive and less energetic.
From what you wrote it's not clear to me what you are doing [...]
The technique is very similar to the metta technique you describe. Let your thoughts cricle around some concept, symbol or idea that as a positive emotional connotation. When positive emotions arise, use these emotions as your new meditation objects.